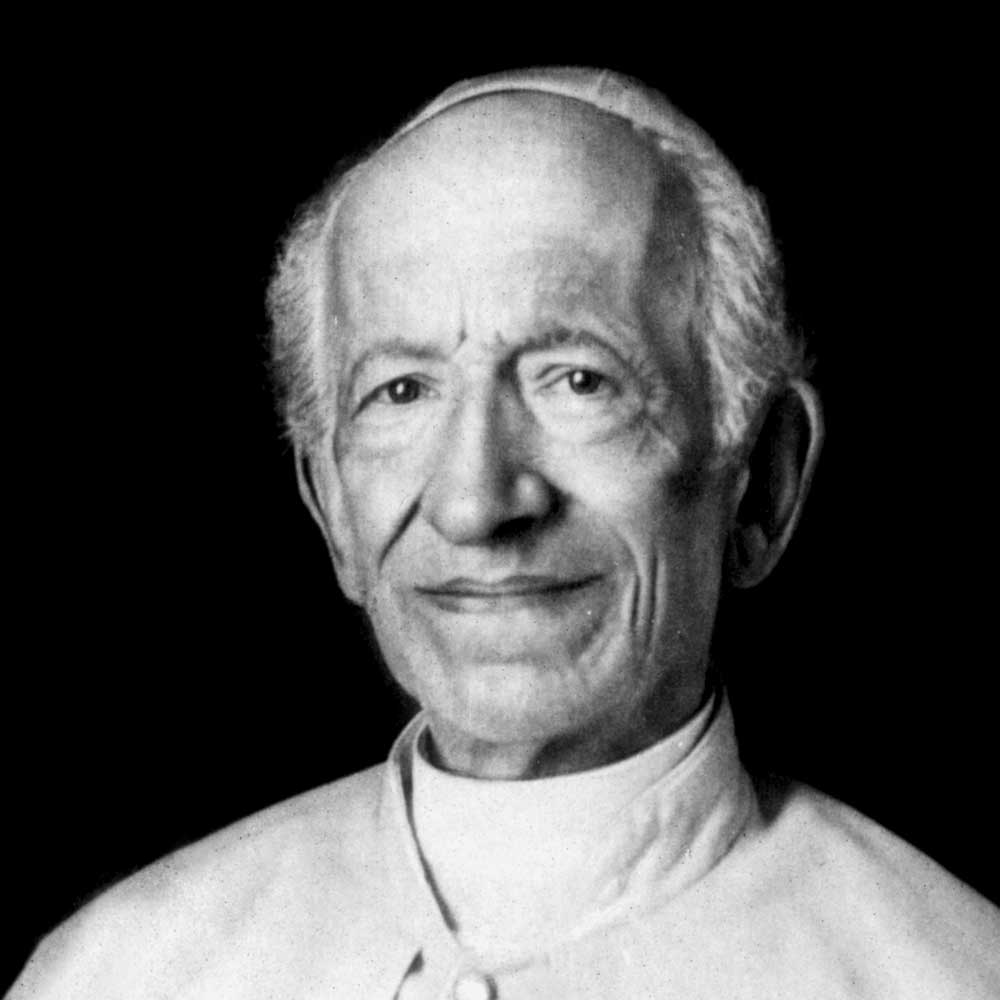 The Prayer to St. Michael the Archangel

This time, we’re going to look at one of the most powerful prayers of our faith, The Prayer to Saint Michael the Archangel.  The origin of this prayer is somewhat foreboding and gives us a clear picture of the urgency for our need to understand spiritual warfare.

For those who may not know, or for those who turn a blind eye toward the topic (myself included), we must take a moment to address the fact that spiritual warfare is real and as confusing, misunderstood, worrying, or downright terrifying spiritual warfare may be, it is a reality and has an impact in our day-to-day lives.  The Church has this to say (Catholic Church 407):

The doctrine of original sin, closely connected with that of redemption by Christ, provides lucid discernment of man’s situation and activity in the world. By our first parents’ sin, the devil has acquired a certain domination over man, even though man remains free. Original sin entails ‘captivity under the power of him who thenceforth had the power of death, that is, the devil’.  Ignorance of the fact that man has a wounded nature inclined to evil gives rise to serious errors in the areas of education, politics, social action and morals.

This dramatic situation of ‘the whole world [which] is in the power of the evil one’ makes man’s life a battle: ‘The whole of man’s history has been the story of dour combat with the powers of evil, stretching, so our Lord tells us, from the very dawn of history until the last day. Finding himself in the midst of the battlefield man has to struggle to do what is right, and it is at great cost to himself, and aided by God’s grace, that he succeeds in achieving his own inner integrity.’

Additionally, we hear from the Letters of both John and Peter that “We know that we are of God, and that the whole world lies in the power of the evil one.” (1 John 5:19) and that we must “Be of sober spirit, be on the alert. Your adversary, the devil, prowls around like a roaring lion, seeking someone to devour.” (1 Peter 5:8).

Alright, so it’s pretty clear that the Church recognizes this as a serious problem and She gives us the tools we need to combat the Enemy.  That’s not all, however.  We are not called to simply understand that this is going on, we are called to literally fight alongside the angels and saints of Heaven as they combat the armies of Satan.  The way we do this is, first and foremost, through prayer, lots and lots of prayer.

I’m having to stop myself from going too far off topic because this post is about the Prayer to Saint Michael the Archangel, and not about spiritual warfare.  I could go on about this subject for a long while (and probably will in another post), but I’ll recenter the focus to the topic at hand… after a quick paragraph on spiritual warfare (I can’t help myself).

CP Theology: Okay so basically, we are caught in a giant mess of a fight for our souls by the forces of the divine and the demonic.  Satan works through sin and manipulation and calls to us through temptations of the flesh and his goal is to get us to deny the love of God just as he and his band of fallen angels did.  The armies of saints and angels are led by Michael the Archangel and fight for us in the name of God that all men and women may be brought into the kingdom of heaven.  The way that we can participate as earthly children of God is by acting in humility and through prayer.  Satan’s great sin was pride – he wanted to be God.  Being a prideful and arrogant person will force God out of one’s soul and usher in the Enemy and therefore, humility, the very act of dying to one’s self in the name of God out of love for Him, is a direct attack to Satan and his demons.  When we pray, we are putting God first in our lives.  Prayer is the way that we can actively participate in the great battle.  Though we cannot fight with our flesh, we can put our spirit on the front lines by praying devotions to our guardian angel and to the saints, especially to the Blessed Mother, and ask them to intercede for us throughout our lives.  A particularly powerful prayer specifically addressing this spiritual battle is the Prayer of Saint Michael the Archangel.

Very good, we’re back on track…

The story of the origins of this prayer begin with Pope Leo XIII on October 13, 1884.  He was saying Mass in his private chapel attended only by a few cardinals and members of the Vatican staff.  As he finished Mass and came to the front of the altar to genuflect, he suddenly stopped.  He simply stood there as if in a trance for several minutes.  His face became ashen white and looked as if he was deeply troubled.  After those few minutes, he rushed away to his office without addressing anyone or talking to anyone along the way, and locked himself inside.  In his office, he composed the full-length Prayer to Saint Michael the Archangel and would emerge only after it was finished.  When he was asked about what happened, he explained that as he was about to leave the foot of the altar, he had heard a conversation between two voices, one guttural and harsh, and one soft and kind coming from either side of the tabernacle.  This is the conversation he heard:

The guttural voice, the voice of Satan in his pride, boasted to Our Lord: “I can destroy your Church.”

The gentle voice of Our Lord: “You can? Then go ahead and do so.”

Satan: “To do so, I need more time and more power.”

Our Lord: “How much time? How much power?”

Satan: “75 to 100 years, and a greater power over those who will give themselves over to my service.”

Our Lord: “You have the time, you will have the power. Do with them what you will.”

Pope Leo XIII was greatly troubled and alarmed by this, which I feel is the proper response, and he knew something needed to be done.  In 1886, he decreed that his Prayer to Saint Michael the Archangel be prayed at the end of every low Mass (like most daily Masses, not sung).  This decree lasted about sixty years and the prayer was said after every low Mass until shortly after the Second Vatican Council when the practice was ended.

The cessation of the prayer is a complex issue and is debated by many, and we will not discuss it at length here.  Basically, it had to do with Pope Paul VI’s relations with communism, the USSR, and the countries behind the Iron Curtain in a policy called Vatican Ostpolitik.  In any event, the prayer suddenly stopped being prayed after this man put an end to it… Weird.

Thank God for Pope Saint John Paul II who recognized the importance of fighting spiritual warfare with the Prayer of Saint Michael the Archangel.  In his Angelus message given in St. Peter’s Square on Sunday, April 24, 1994, he encouraged Catholics to start praying the prayer once again.  He said,

The prayer can fortify us for that spiritual battle about which the Letter to the Ephesians speaks [of]: ‘Finally, draw your strength from the Lord and from his mighty power.'(Ephesians 6:10).  And to this same battle that the Book of the Apocalypse refers [to], recalling in front of our eyes the image of St. Michael the Archangel (cf. Revelations 12:7).  Surely, this scene was very present to Pope Leon XIII, when, at the end of the previous century, he introduced to the entire Church a special prayer to St. Michael: ‘St. Michael the Archangel, defend us in battle; be our protection against the wickedness and snares of the devil…

…Even if today this prayer is no longer recited at the end of the Eucharistic celebration, I invite all to not forget it, but to recite it in order to obtain help in the battle against the forces of darkness and the spirit of this world.

Therefore, for the sake of our souls and for the sake of our Church, I urge you, as your brother in Christ, to pray this powerful prayer after you attend Mass and often elsewhere.  May it be for us a strong defense against the snares of the Enemy and may it give us hope that one day, we may join the angels and saints in the eternal banquet of Salvation.  May the Lord, our God, prevail victoriously against sin and the demons of Hell through his Love and through our Savior, Jesus Christ.

I have included below a PDF and a Microsoft Word document of a prayer card which I made for my own use.  Please take it and use it.  I have arranged the text boxes so that all you have to do is print this file on both sides of a sheet of paper; it makes a handy little prayer card.  If you are accustomed to different versions of these prayers, feel free to use the MS Word document to make any changes you’d like.

The Catholic Physicist View all posts by Max Milan